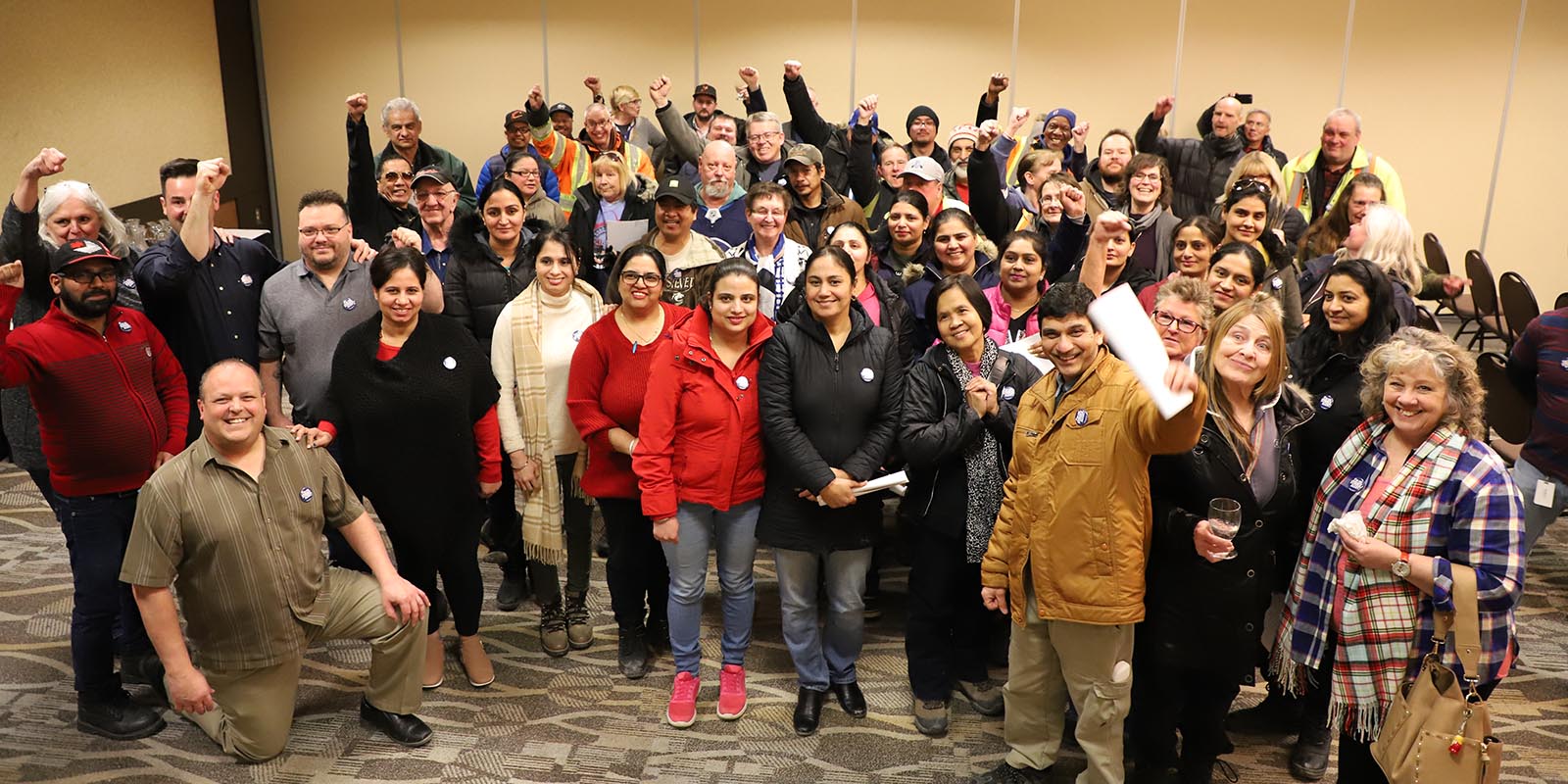 Photo taken pre-COVID at the meeting where Bus Drivers initially voted to go on strike.

UFCW 832 bus drivers at the Winnipeg School Division (WSD) Bus Driver’s have won a fair wage package from an arbitrator after nearly 90 days on the picket line last fall. This decision helps to point out that the Public Sector Sustainability Act (PSSA) was never sustainable for the public sector.

“Bus drivers went on strike last fall to stand up against the PSSA, and we’re incredibly proud of these members for standing up and fighting for what’s right,” said Bea Bruske, Secretary-Treasurer for UFCW Local 832. “Without the dark cloud of the PSSA hanging over bargaining, and the School Division’s games at the bargaining table, a strike would have easily been avoided.”

The Collective Bargaining Agreement (CBA) initially expired in June of 2019, and the WSD Bus Drivers will be awarded a 2% raise in the first year of the Collective Agreement and .75% in the second year of their new CBA. The new CBA has full retro pay back to June 2019, and expires in August 2021, which means the Union will head back to the bargaining table soon, in the hopes of landing a deal through meaningful bargaining at the table.

Bus drivers initially went on strike last fall against the terms of the PSSA that the employer continued to push even after the ‘draconian’ legislation was struck down in court. The PSSA in combination with other concessions being pushed by the School Division at the bargaining table pushed bus drivers to hit the picket lines.

The strike ended after nearly 90 days on the picket line when UFCW 832 applied to the Manitoba Labour Board to use the settlement process outlined in the Labour Relations Act. This process – often referred to as Alternate Dispute Resolution – allows either side in a strike or lockout to apply to end a strike after 60 days on the picket line. After up to 30 more days, everyone goes back to work and a binding arbitration process will proceed.

The Pallister government has announced that they will remove Alternate Dispute Resolution from the legislation later this year, which will cause future strikes to go on longer and be more disruptive to people’s lives.

“Manitoba has a unique process for ending strikes, and without it, strikes will go on longer and get uglier,” said Bruske. “Alternate Dispute Resolution is a made-in-Manitoba solution that gives both sides equal opportunity to end a labour dispute, with a third-party ruling. The Pallister government needs to strongly reconsider removing this piece the Labour Relations Act.”

UFCW 832 looks forward to heading back to the bargaining table in a few months to work towards a fair deal for the 95 bus drivers the Union represents.